Irish singer-songwriter Andrew John Hozier-Byrne, known as “Hozier,” brought his audience to church with his enchanting vocals and words on his Wasteland, Baby! Tour on October 21, 2019, in Sacramento, California. Hozier, alongside his just-as-bewitching band, rocked the Memorial Auditorium with 20 songs, including a cover of Stevie Wonder’s “Living for the City” and a new original song, “Jack Boot Jump.” 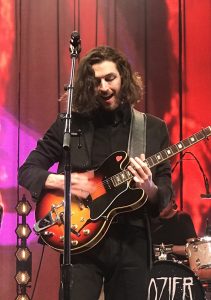 Hozier began the night with “As It Was,” a song off his newest album, Wasteland, Baby! released earlier this year in March.

“The eyes at the heights of my baby. Let’s hope at the fight of my baby. The lights were as bright as my baby, but your love was unmoved,” sang the long-haired singer, gently tapping his acoustic guitar as his audience joined in singing.

Greatly influenced by his religious upbringing and Ireland, Hozier includes pastoral and religious themes in his music, making his songwriting unique. In Sacramento, Hozier brought a fresh, new take to his song, “From Eden,” off his first studio album, Hozier (2014). The studio version of “From Eden,” which is a Garden of Eden allusion, has a merry, high-spirited way about it; however, the live rendition is stripped and vulnerable, giving it an even more romantic and dramatic edge.

“Babe, there’s something lonesome about you. Something so wholesome about you. Get closer to me,” Hozier sang with weary vocals, accompanied by his acoustic guitar and backup vocalists.

“Dinner and Diatribes,” which followed “As It Was,” showed Hozier’s quick versatility from tenderhearted to alluring. Almost every song was followed by a “thank you” from Hozier to his audience and his band, making his kindness and gratitude, aside from his versatility, one of the best parts of seeing him live. 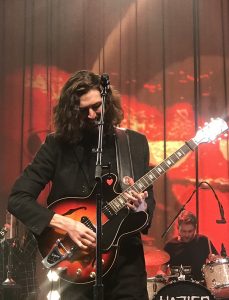 Hozier also featured fan favorites: “Nina Cried Power,” “Movement” and “Cherry Wine,” each delivering different messages and emotions from the singer and his audience; however, his live rendition of “Take Me to Church,” which dominated the charts and radio in 2014 and placed Hozier on the radar, was the night’s greatest highlight.

“If the Heavens ever did speak. She is the last true mouthpiece. Every Sunday’s getting more bleak. A fresh poison each week,” the audience sang to Hozier as he lent them his microphone, giving everyone in the venue chills. The single’s “Amens” were shared, too, making the live rendition more captivating in person. 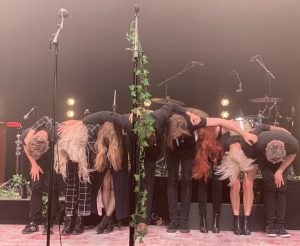 If you haven’t had a chance to attend a Hozier concert yet, check out https://hozier.com/ for more information on his upcoming American shows. Want some cool insider scoop? At the Sacramento show, Hozier announced that he’s been working on a new album, which is set to be released before Christmas. Can’t wait until then? Stream Hozier and Wasteland, Baby! on Spotify and Apple Music today!