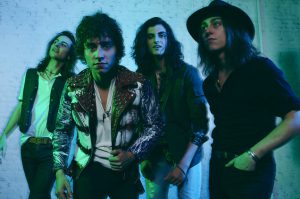 They've released a handful of EPs and singles over the last few years including Black Smoke Rising and From the Fires, but Anthem of The Peaceful Army will include ten originals that encompass Greta Van Fleet's dynamic and roaring vocals, intricate guitar chords, and booming drums and bass lines including the track "Watching Over" the band dropped on September 7th as an album preview.

"Watching Over" is one of those songs that slowly starts to build as lead singer, Josh Kisza, howls the lyrics "I wonder when we'll realize/ This is what we got left/ And it's our demise" and definitely captures the mysticism and rock our generation has severely been missing out on. Although critics have said Greta Van Fleet sounds merely like a Led Zeppelin cover band, Anthem of The Peaceful Army will be their shot to branch out and create their own sound.