“Sorry to Bother You” Doesn’t Apologize for its Honesty: a Review

By ASUNJuly 27, 2018Uncategorized
No Comments 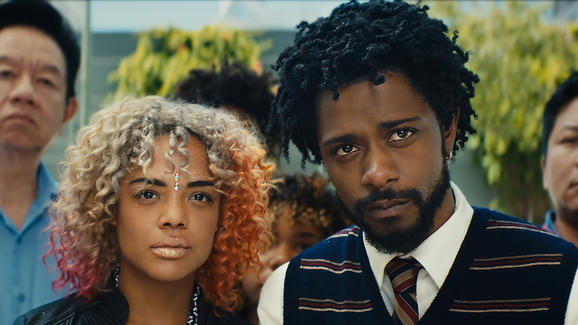 “Sorry To Bother You” is the summer’s most refreshing and unexpected film release due to its realistic plotline with elements of sci-fi sprinkled in. Set in a futuristic version of Oakland, Cassius Green (Lakeith Stanfeld) is a newly hired telemarketer peddling encyclopedias for a questionable corporation and struggling to make a sale. That is, until a co-worker tells him to use his “white voice”- an obnoxious but charming sales tactic that skyrockets him to the top of the company and puts him in the crosshairs of the CEO. The main character finds out quickly that it’s lonely at the top while his friends below are fed up with low wages and unfair treatment from superiors, all while believing he’s a sellout.

You may be questioning what part of this film is considered science fiction. It comes as a quick twist within the last half hour and leaves Cassius scrambling to get the truth out. At this point, though, he is considered a social pariah and resorts to using his status to get on reality television to “spill the tea.”

Director Boots Riley, a former rapper and lyricist, has crafted a film which is a throwback to how films were once made. It is authentic and does not try to replicate current motifs. “Sorry to Bother You” tackles themes like race and success in a positive way and can be considered politically neutral.

The characters are also well developed, leaving you cheering for their success and wondering just happened.