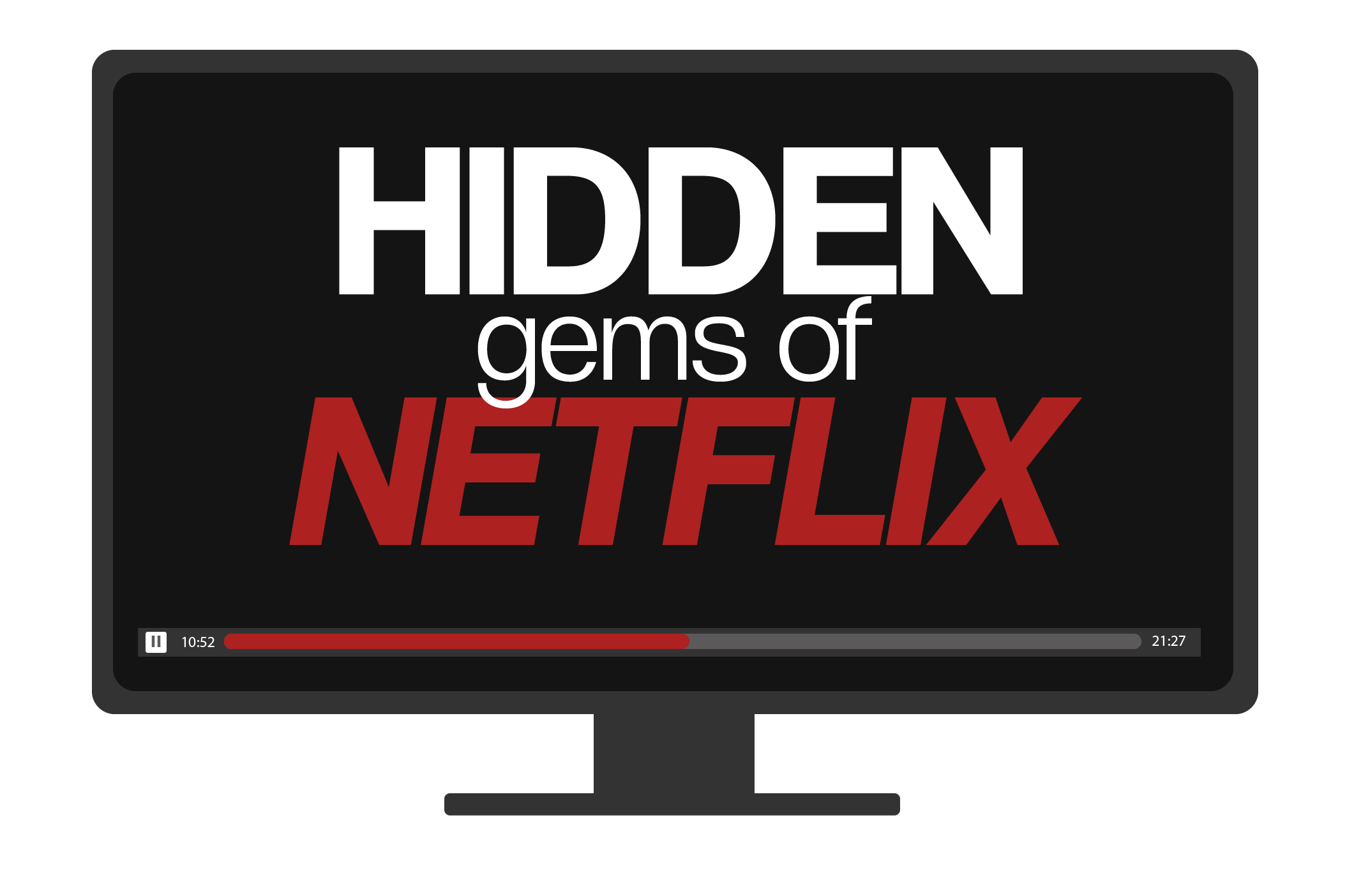 Netflix contains a lot of interesting finds that may be overlooked due to the popular page and the very limited selections on the home screen. After many searches and watches the way that Netflix has conformed to me has been quite satisfying through the way that I have chosen what I watch. Most of the time when entering Netflix, I am looking for something new, something to binge, or something that looks extremely interesting to me. The way that I found most of these titles was by a random scroll through the many categories and genres on Netflix itself. While a couple of others were experienced by introduction and lead me to find even more interest in the subgenre that inspired searches which lead to many other finds of similar standing. Finding things that are enjoyable and suitable for yourself can be hard; here are some recommendations that I have found to be thoroughly entertaining.

Reign (TV Show): From romance to prophecies to politics and violence this show has a lot to offer to many different crowds looking for an extremely diversified plot. The character dynamic is a little frustrating as they always tend to make decisions that are going to inflict some sort of pain on them in the future *sigh* don’t you just love it when you get so invested at every twist and turn only to have them make the worst decision possible? This is what keeps us interested though, that they keep betraying what we want; and we keep watching so that they continue to spark our interest.

Boogie Nights (Movie): A film like this is nothing anyone expects it to be. With a setting in the 70’s this extremely graphic and sexual film explores what it was like for a young man to become something of himself through a group of porn actors. This coming-of-age film is chalked full of humor and hard-hitting happenings of this peculiar group of people who see their own way of getting through life. This film can really be of interest to people who are looking for an exploration of something a little off the beaten path, while enjoying some big stars such as Mark Wahlberg and Philip Seymour Hoffman.

Copenhagen (Movie): This movie explores what it’s like to connect with someone. This is not a story about love, although it may seem that way when the two main characters begin to spend more and more time together and learn more about each other as well as a long-lost family member of one of the characters. This story is not only extremely inspirational in self-discovery, but it explores the idea of how being with someone doesn’t have to mean romance. There can be companionship and support while being around someone even though there seems to be a chance of romance. A feel-good movie that shows what travel can bring is a stunner for all audiences.

Adult World (Movie): Finding out about your idol can be a little unnerving, especially when they tell you that they have pretty much given up and aren’t anything like you expect them to be. In this film, there is exploration of passion and dedication as the main character seeks to find what she has always been searching and yearning for in her life as a poet. There is a lot of self-discovery in this flick as the main character struggles to accept the reality in which she is in, while also learning to accept it and the way that people are present in her life.

Easy (Anthology): This two season series is an interesting look at the sexual lives of ordinary people. The star-studded cast makes for interest as well as a captivating plot that reels people in through its inside look at each other’s sex lives. Learning about something that can be a bit awkward, as it is portrayed in the series is extremely relieving for viewers. This show depicts the realities of trying to maintain a healthy sex life which incorporates a feeling of understanding and recognition to the audience. This type of entertainment involves humor where it is needed and bits of seriousness sprinkled all about in order to really capture what it is to embark on such a relationship, and to maintain it, with another person.

Black Mirror (anthology): This series throws people off from the get go. There is no chronological order in which these episodes belong to and the stories within each season do not string together nicely as to create stories for the characters with an introduction of deep struggle. Each episode is its own movie of sorts. Sometimes there is not a resolution to the problems that are faced, which can leave a watcher distraught. The different types of futures that these episodes introduce give alternate ideas of how politics, technology, and overall social norms are founded when in these substitute ideas of futures. This show can really capture the interest of many audiences as it explores relationships, dystopian societies, extreme competition, and extremely serious social situations. These differing ideas can not only capture interest, but show watchers what can happen when there is an overconsumption of anything.

With shows like Stranger Things and Orange is the New Black, some Netflix films, shows, and documentaries can be pushed aside and left to collect cyber dust. Unless you enjoy digging through each genre and are willing to set some time aside to indulge in a new film, show, and documentary, it is likely you haven’t encountered some of the best stuff on Netflix. I have found each of these through spending too much time on Netflix (I am not alone) and giving works I have never heard of a chance. Taste in things is completely subjective, but the following shows, films, and documentaries are wonderful things to give a try.

Living in the Material (Documentary): From his Liverpool, England, beginnings to Beatlemania to Hinduism and so on, this documentary explores the personal life of musician, George Harrison. Through footage of his humble Beatles beginnings and interviews with Harrison himself explaining subjects from his personal life to his music, those who never had the privilege of meeting Harrison finally have the opportunity to understand and immerse themselves in the “quiet Beatle’s world.” Director Martin Scorsese delivers an intimate and beautiful documentary with unseen footage, acoustic and haunting demos of Harrison’s music, personal stories from friends and family (even Paul McCartney and Ringo Starr), and unseen photographs from the Harrison estate. This documentary is a bittersweet treat for all George Harrison devotees and music fans, no matter what genre you’re into. Don’t know who George Harrison was? This is where to start!

Shot! (Documentary): This fun biographical documentary explores the life of music photographer, Mick Rock. Rock himself goes through some of his memories from working as David Bowie’s personal photographer as he was metamorphosing into Ziggy Stardust, Lou Reed, Syd Barrett, Iggy Pop, and more. This documentary does a great job of both romanticizing and peeling layers to make the not-so-awesome side of rock and roll and its lifestyle visible. This psychedelic documentary is perfect for music and photography enthusiasts.

Love (show): Like Pat Benatar sang back in the 80s, love is a battlefield and Love has no problem facing this fact. Set in Los Angeles, California, Love explores the modern romance between love and sex addict, Mickey (Gillian Jacobs) and aspiring scriptwriter, Gus (Paul Rust). This series isn’t your typical and pleasing love story where boy and girl meet and everything is fated to end well, which is what makes it so infuriatingly organic. It’s about flaws and emotional unavailability, being in love and falling out of love, trying to find love in the millennial age, and dealing with sobriety and other obstacles. Too much of a realist to enjoy The Notebook or Twilight? This is the show for you.

Masters of None (show): This show follows Indian-American and aspiring actor Dev’s life and his handle of New York City and adulthood. Singlehood and dating apps, stereotypes, and more are explored in the show. Masters of None is co-written by Aziz Ansari (who plays Dev) and is inspired by his own life experiences. This show does not fail to have at least one theme or struggle that one can relate. It’s perfectly relatable, comical, and reminds us that we all have a little Dev in us who is just trying to find a special someone to split a bowl of spaghetti with.

Fun Fact: Master’s of None’s “Thanksgiving” episode won an Emmy for Outstanding Writing for a Comedy Series. The episode follows Dev’s friend Denise and her journey with her sexuality, her coming out story, family, and being an African-American Lesbian woman today.

Freaks and Geeks (show): It is a bit painful to write about this show. Why? It was packed with awesomeness, great music, young James Franco and Seth Rogen, and was wonderfully written, but it was cancelled after its first season. Set in Michigan in the early 80s, Freaks and Geeks is about two groups of teens: The freaks who smoke marijuana, listen to rock, and skip class and the geeks, freshman who are trying to handle high school while getting bullied and playing Dungeons and Dragons. The two protagonists and siblings, Lindsay and Sam, try to find their place in high school and fall into the two categories along their journey. 18 episodes of pure greatness.

Carrie Pilby (film): This charming film follows the life of Carrie, a nineteen-year-old child prodigy, who has recently graduated from Harvard and is now taking on New York and adult roles/struggles. The socially awkward teenager is advised to complete a list of goals before the end of the year by her therapist. From doing something she loved to do as a kid to rereading her favorite book to going on a date, Pilby begins to find herself and invite people into her life and battle with things she has pushed aside. Carrie Pilby is a quirky film that reminds the audience to live a little and is a perfect story for us out here struggling at the whole adulting thing, too.