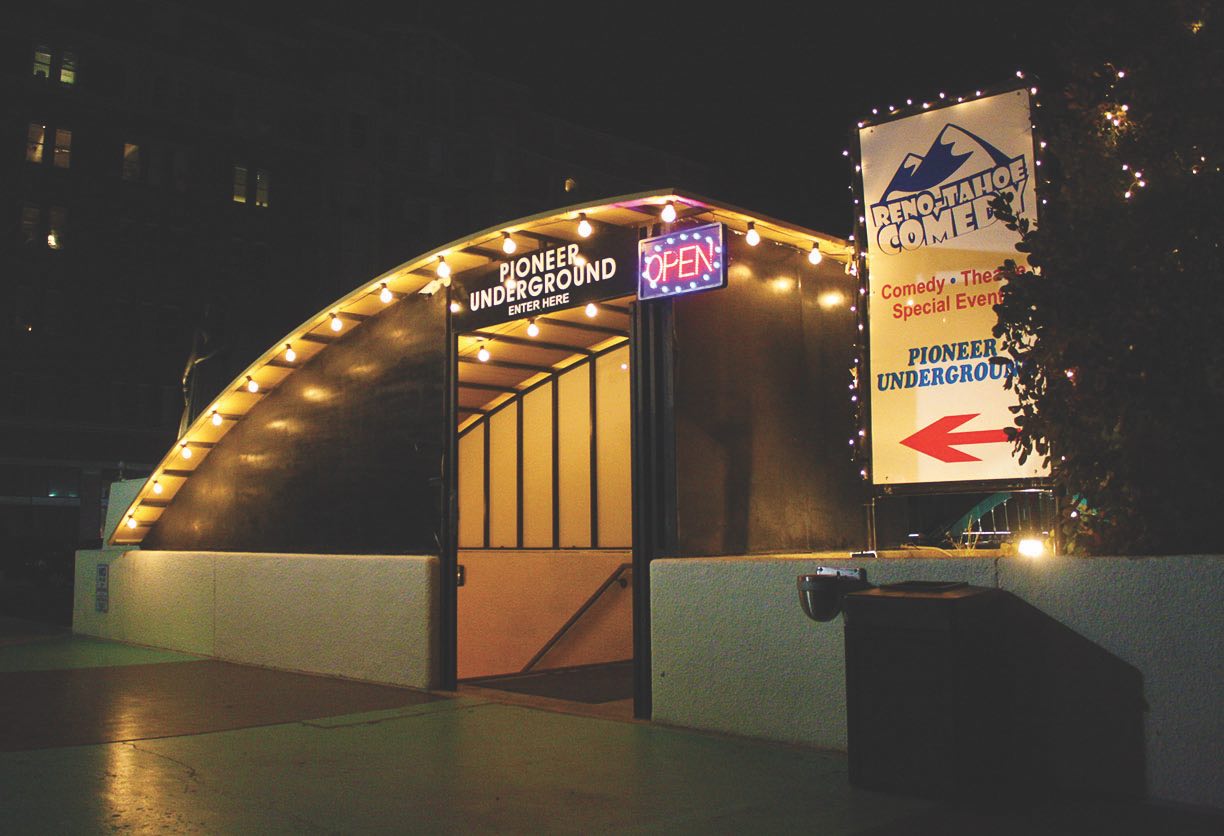 If you’re looking for a place that’s both hidden and hilarious, look no further than the Reno-Tahoe Comedy Club. This underground gem is right outside of the Pioneer Center downtown, leading you down a small staircase that takes you to a comedy club you never knew you were standing on before. The venue hosts a wide variety of comedians from all kinds of backgrounds, including young teenagers, high school teachers, and a featured Family Guy voice actor. The owner, Wayne Wright, opened Reno Tahoe Comedy at the Pioneer Underground six and a half years ago.

“The best part is the great people I get to work with,” Wright said. “The people that are here, they all love comedy and that’s why they’re working here. People just love being here, and we’re working with good people. And if you’re a jerk, we’re not working with you.”

One of the lead comics at Reno/Tahoe is “Sean Peabody, The Hawaiian Comedian.” Peabody has been doing stand-up comedy full time for the past twenty years. He originally started his comedy career during his time in the armed forces.

“I was dared to go on stage by my unit,” said Peabody. “I was in the military in ‘97, and I used to teach rifle marksmanship. And when I would teach my classes I would always tell jokes in the middle because, you know, I got marines walking around who are holding weapons so when I taught my classes I would always tell jokes, and they would laugh. But then there was a coach from another unit that came up and asked me if I was ever interested in doing stand-up and if I would be willing to come up and do it. He gave me my first 7 minutes in Oceanside, it was like a dare. He was like ‘just do it Peabody!’ so I was like, alright. And since then I’ve had the [comedy] bug.”

Peabody travels the world doing stand up and has been involved with Reno-Tahoe Comedy since they opened.

The Pioneer Underground even hosts comedians you wouldn’t typically expect to see, like 18-year-old Reno local, Tatiana, who first started stand up when she was 16 years old.

At age 18, Tatiana is a young woman in what seems to be an old man’s game. With that, there are some hurdles that she had to overcome in her career.

“A lot of people assumed I didn’t know what I was doing or that I was just doing this as a hobby,” said Tatiana, “Even still, I’ll go to big clubs in San Jose and people will say ‘uh you should just go to school, you should get a real job, this won’t pay off for you very well’. So that’s different, because nobody will say that to a 40 year old man who is doing it for fun.”

Amy Bosch, a single mother and an online high school teacher, has also been doing stand up for the past two years. After the death of her friend she decided that life is too short, and she needed to get out and do what makes her happy.

“I love making people laugh,” Bosch said. “It is such a release to laugh and I really feel that laughter is the best medicine and can cure anybody’s day. It’s just so much fun to see the faces light up, the belly laugh, the chuckle, even the snort. It’s fun! Who doesn’t like to laugh? Unless if they have a stick up their butt.”

Bosch is the Assistant Manager at Reno-Tahoe Comedy, and sometimes even her students will come and see her perform.

One of the lead comics of September, Kabir “Kabeezy” Singh, has been featured on shows like “Punchline”, “Gabriel Iglesias Presents Stand Up Revolution,” and was a voice actor for a few Indian characters on “Family Guy”. The lead comics are on the stage for the biggest block of time, so having a lot of material is key.

“Writing jokes man, every couple hours a day. You just gotta sit there with a pen and paper. During the duration of an evening I’ll jot down ideas in my phone and write about it. It’s tough to do it any other way, it’s all up to allocating time to do it.” Singh said.

Reno-Tahoe Comedy has shows playing every week, Thursday through Sunday, with a new lead comic each week. The Pioneer Underground is filled with such interesting comedians, who are sure to make you laugh.

“When you’re at a comedy show and laughing, no matter what problems you have in life, whether if you’ve paid your rent, or if you haven’t paid your car note, or maybe car has been repossessed by the time you’re at the comedy show (laughs), but the best part is that when they’re sitting in there with you and laughing with you they’re not thinking about that stuff,” said Peabody.

For more information on schedules and comedians, visit renotahoecomedy.com.