Failure Machine Has Yet to Fail 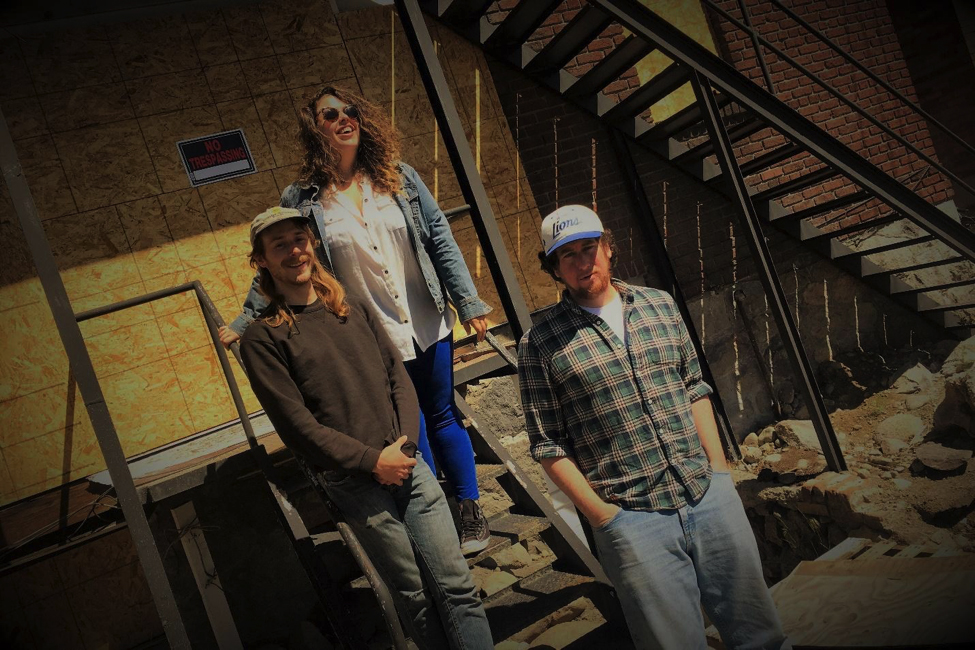 Failure Machine describe themselves as a three-piece “garage-rock soul” or “beer rock” band. The band of twenty-somethings is composed of Clint “CP30” Philbin, Rachael “RachBoo” McElhiney, and Spencer Kilpatrick. Their musical influences include The Dirty Nil, Otis Redding, Boz Scaggs, and The Dirtbombs. According to Beau Dowling, Failure Machine is “another example of great music coming out of one-armed bandit land.”

“Bass is so often considered a necessary element in a band that it seems weird to not have it,” Adam Landis, keyboardist of Silver, said. “However, they manage to groove very well without any bass, and in a way it adds to their raw charm.”

“It started out as just me and Clint,” Kilpatrick said. The duo added two members who are now “doing grown-up stuff,” before adding Rachael McElhiney on baritone “saxyphone.” The band has since slimmed down to the present trio of Kilpatrick, Philbin, a

Philbin and Kilpatrick grew up near Auburn. They each moved to Reno in their own time and played in different local bands before forming their own. “We really wanted to go on the road more and do more band stuff,” Philbin said.

“We started feelin’ like we were cursed, because every band we would join would break up pretty quick,” Kilpatrick said.

Kilpatrick and Philbin were recording at Dogwater Studios one day and saw the name Failure Machine on a list of other bands. They knew that name was meant for them. They awaited the break-up of that Failure Machine so they could use the name.

“It makes the most sense, because that’s what a band does,” Kilpatrick said.

Clint Philbin started playing drums when he and Kilpatrick started their band nearly five years ago. Kilpatrick has been playing guitar since he was 15 or 16, which according to him is “too long.”

“I should be better for how long I’ve played – a decade,” Kilpatrick said.

Kilpatrick has sung lead vocals for Failure Machine, up until now. McElhiney will now be singing lead vocals while playing saxophone.

“We’re becoming a leaner Failure Machine,” Kilpatrick said, adding, “We’re gonna be doing pretty much the same shit we’ve been doing except a little bit better. Be touring and putting out little EP’s.”

The members of Failure Machine showcase a concrete passion for denim jackets and plaid. The trio describe an instance in which they performed a “denny-J” themed show “on accident.” Denim jackets and plaid shirts are clothing so common to each band member, they sometimes wear each other’s clothes, and not always by accident.

“Spencer’s a big fan of the denny-J,” Philbin said.

“I like to wear one and then put another around my waste,” Kilpatrick said, adding, “Then I like to have one hangin’ over my left shoulder in case I get super cold.”

Failure Machine is one local band that plays outside of Reno on a regular basis. In the last two years, Failure Machine toured up to Seattle, down to Los Angeles, and over to Las Vegas. They mostly tour the West Coast, but are open to touring circuits closer to home as well.

“We’ve been dying to get into the Sparks Market,” Kilpatrick said.

One of Failure Machine’s favorite places to tour is Nevada’s own Elko. “I highly recommend it,” McElhiney said.

“If you’re ever driving to Utah or something and you feel like goin’ on a three, four-day bender, stop in Elko, ‘cause it’ll do most of the work for you,” Kilpatrick said.

As for the EP’s, Failure Machine has “four or five” of them now. “All EP’s,” McElhiney laughed. According to the Kilpatrick, they “don’t have the attention span” to wait and record full-length albums, so they release all their tracks in increments of “four or five.”

These songs are all available on Failure Machine’s bandcamp.com website, free to listen and download. The band also has merchandise available for sale, including stickers and cassette tapes. That’s right – cassette tapes. In this day and age, cassett

e tapes are becoming the new vinyl for a new generation.

“It’s like the nostalgia factor, like vinyl. It’s a souvenir,” Kilpatrick said. “It’s really silly but they sell really well.”

According to Clint Philbin, Joan and The Rivers “started just recording themselves,” then later expanded to record tracks for other friendly bands.

“They book shows, do merch, record the music, they do pretty much everything,” Kilpatrick said, adding, “It’s like a one-stop shop.”

Failure Machine contacted Joan and the Rivers on Facebook, asking if they wanted to play a show together. In a short time, Failure Machine was welcomed into the SNAFU Family. Clint Philbin knows the exact date of the first show they played with Joan and The Rivers.

“November sixteenth, 2014,” Philbin said, adding, “That was the first show poster I ever made.”

Failure Machine typically play 35-minute sets. Nearly all their songs are about two minutes long. For Rachael McElhiney, every performance offers a different audience and a different experience.

“I love sweating a whole bunch with my best buds,” McElhiney said, adding, “And if your friends, who came to see you, are sweaty and gross too, that means it&#39;s a really good one. I love my friends!”

According to Adam Landis, Silver keyboardist, keeping a band together for as long as Failure Machine – five years – can be very difficult. Landis believes that strong friendships between bandmates is key to keeping a band intact.

“Everyone has their own lives to attend to while keeping the interests of the group in mind, but sometimes life gets in the way of maintaining that relationship and people find themselves at a crossroads,” Landis said.

The members of Failure Machine enjoy performing almost as much they enjoy what accompanies those performances. Clint Philbin likes feeling nervous beforehand, then drinking beer and relaxing afterwards. For Spencer Kilpatrick, the best part of playing is hanging out and drinking with other bands after the shows.

“For us, beer can be medicine,” Kilpatrick said.

“We have a ton of fun at The Loving Cup,” Philbin said.

“Sometimes, with the amount of dollars that are spent on beer, not enough dollars go to the bands,” Kilpatrick said.

Local musician Adam Landis has played the keyboard for Reno bands Rigorous Proof and Silver, and he agrees with this issue of proper compensation and recognition.

“It is sometimes difficult to get a venue to pay a fair compensation, which can be discouraging for local bands,” Landis said.

From a band’s perspective, playing a venue ran by aband can be much more fair to everyone putting on a show there. At the FM Concert Hall, bands aren’t cheated out of any money they bring the venue, because there is no money to be cheated out of. Donations, however, are encouraged.

“All the beer is free, and all the music’s free,” Kilpatrick said.

“That’s what we’re trying to do this year at Gremfest is like, get the band’s money,” McElhiney said.

“Put the beer back in the hands of the people,” Philbin said.

According to the Facebook event page, Gremfest ’17 will take place May 12 and 13 at The FM Concert Hall “to celebrate the birthdays of Kelsey Garfinkle, Eric Smith, Spencer York, and Dennis Rodman.” Doors open and barbecue begins at 6pm on Friday, May 12, and at 5pm on Saturday, May 13.

“We usually get a couple kegs and just kinda – we just really dig in,” Kilpatrick said. “We lock the doors and start lighting a bunch of candles,” Kilpatrick jokes. “My house is so dangerous.”

“The music scene in Reno is growing and full of extremely talented and creative musicians, but I think that people not already in the scene are not aware of the great music we have here,” Adam Landis said.

Tickets to Gremfest will be available from Failure Machine on May 11 at the Lincoln Lounge, where they will perform with Franc Friday and La Safari.

In the future, Failure Machine sees themselves going “straight to the top.” Armed with denny- J’s, cassette tapes, and their own annual music festival, who’s to stop them?

“It’s always a pleasure playing with those guys,” Landis said, adding, “They’re some of the best humans I know. I would definitely play another show with them again.”