Striking Green in the Cannabis Boom 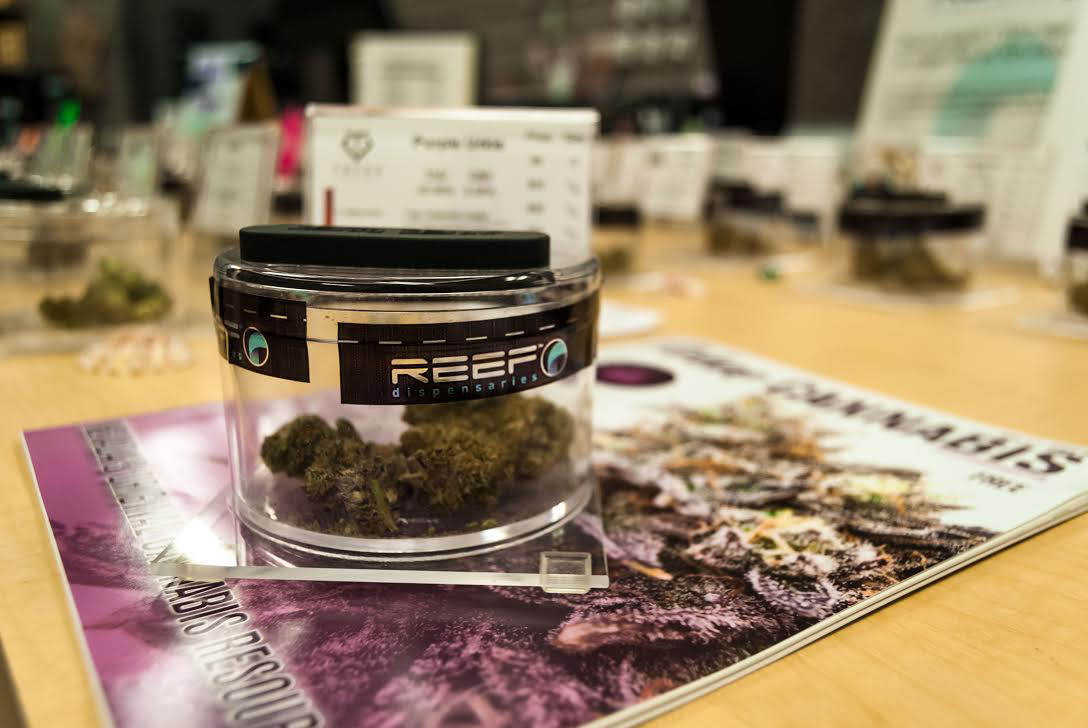 In a small store tucked discreetly behind a shopping center in Sun Valley, Nev., 29-year-old store manager Greg Pulsipher chats with a returning customer. Outside, the pounding rain is repeatedly hitting the black bars that encase the store. The rain outside competes with the sound of energetic rock music from overhead speakers as Greg asks the older woman about her day. She paces around an oak table neatly lined with rows of glass jars filled with marijuana, occasionally picking up a jar and smelling its contents before she makes her final decision: White Sangria. Greg compliments her choice, it’s his favorite strain as well. She exits the locked room and re-enters the reception area, where an employee will pass her a three-ounce jar of marijuana through a bullet-proof glass window.

Every customer at Reef Dispensaries undergoes the same orderly process to purchase medical marijuana. He or she will first ring the bell front door and wait for an employee to buzz them in. If the customer is new to the dispensary he or she will fill out a brief application and show proof of recommendation and their medical marijuana card. Nevada is the only state that allows out-of-state cardholders to purchase medical marijuana, therefore, the customer may be a cardholder from any state that has legalized medical marijuana. After signing in, an employee of the dispensary will call the customer back into the locked room that houses all of the products: from edibles, to vape oils, to “the flower,” as Greg would say. The customer will select a product and wait for the employee to punch all of their information into the system before returning back out to the reception area. The employee then goes to the storage room behind another locked door and gets the product the customer chose. The final interaction occurs with bullet-proof glass in between the employee and customer, as the customer pays in cash—the only accepted payment—and heads on their way. Each medical marijuana cardholder may purchase a maximum of 70 grams every two weeks, to put that in perspective, about 3 grams is an eighth, which is the typical amount sold per visit. 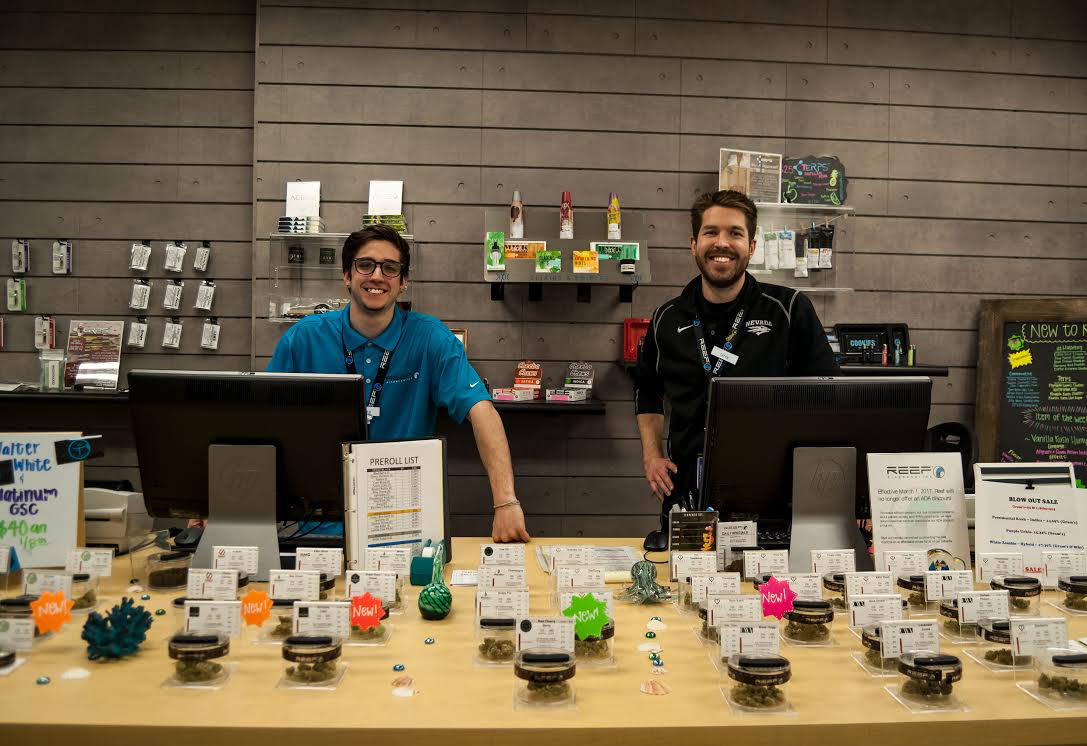 “I’ve got all walks of life coming in here,” Greg says. “Some people come in and you know that they probably do not need to be using. For every one person using recreationally, there’s one person who is using marijuana for a legitimate reason.” However, the dishonest aspect of the industry is okay for Greg because almost daily he will hear a story from someone about how medical marijuana has positively impacted their lives. “People with chronic pain, or people previously addicted to opiates come in here and find comfort in a manageable treatment.”

Reef Dispensaries in Sun Valley is one of the five franchise locations in Nevada and Arizona. The chain owner is taking advantage of the booming cannabis industry in Nevada, especially in light of the newly passed ballot initiative which legalized recreational marijuana throughout the state. As soon as June, Reef Dispensaries may be one of the 20 designated recreational dispensaries in Northern Nevada. But for now, Reef Dispensaries is one of 10 different medical dispensaries that has arrived Reno-Sparks area over the past two years. Medical marijuana has been legalized in the state of Nevada since 2001, however, Silver State Relief was the first medicinal marijuana store to open its doors back in 2015. Since then, dispensaries including Kanna, Mynt, Blüm, and Reef have opened in rapid succession. “It should not take too long to get recreational dispensaries up and running in Nevada, because we’ve had a long history with regulating ‘taboo’ things, like prostitution and gambling,” says Greg. And while it took the state 14 years to license the first medical marijuana dispensary, Nevada made sure that there were good practices in place for when the substance did go recreational. “All 10 of the medical dispensaries will likely be ‘grandfathered’ into becoming recreational dispensaries, and then 10 more licenses may become available,” says Greg. Northwestern Nevada is allowed 20 dispensaries, while the Las Vegas area is allowed 80 dispensaries, according to Greg. Nevada also requires marijuana to undergo stringent testing. The majority of the “flower” sold at Reef is a product of the company, while the edibles and vaporizing oils are from several different companies that most stores carry.

The Sun Valley location of Reef Dispensaries is only three months old, and the newness is immediately apparent. The decorations are ocean-themed yet sparse, the new white paint in the reception room is a stark contrast from the basic black chairs that line the walls, and the back office that Greg shares with his staff is empty, given a couple notebooks and lunch bags. But soon enough this location will look like the Sparks and Las Vegas locations, which are decorated in a style that mirrors high-end boutiques. The director of Reef Dispensaries is coming to “revamp” the location by the end of February, giving it the look and feel of the other locations.

Greg jumped at the opportunity to work at Reef Dispensaries in late July, 2016. He saw a post on Instagram about a team member job opening and applied immediately. He had been trying to find a job that suited him for some time. During the summer of 2016, Greg went from managing a summer day-camp, to driving a tow truck for an insurance company, to working at Reef Dispensaries. He also has experience selling wine at a local wine store. While he seems to be a jack-of-all-trades, Greg has a bachelor’s degree in education from the University of Nevada, Reno. For a short amount of time, he worked as a P.E. teacher at a public elementary school. However, after 10 years of managing an aftercare and summer camp program, he lost interest in teaching. Maybe elementary education is something he will go back to, but for now, he enjoys educating his customers on the right way to use marijuana. Greg worked at the Sparks location on Glendale Avenue for three months before being promoted to manager and being tasked with opening the new franchise location in Sun Valley. In August, Greg worked 14 hours a day for weeks straight—he only got one day off.

“I don’t know how I feel about this issue. It kind of seems contradictory as a society to discourage people from smoking tobacco, while saying it’s okay to smoke cannabis,” says Greg. “We don’t really know what kind of health effects smoking cannabis could have in twenty years.” Although Greg is excited about being able to “upsell” customers once the store goes completely recreational.

“When a medical user comes in here, they know what amount of money they have and they know what they want to buy. Medical users have a purpose for buying marijuana, while recreational users are looking for a good time, and we can make them pay more money than they need to for that good time.” Greg’s wife Kari is a pharmacist, and he shared that her opinion of the cannabis industry matches his. She agrees that medicinal marijuana has its benefits to people using it correctly. “Her moral compass is in the same place as mine. We just don’t know if the recreational ‘good’ outweighs the potential harm,” says Greg.

Greg’s experience in management and the patience he learned from working with children has paid off in this new career path. The only curveball for him has been doing inventory of all the diverse products. But the environment is laidback and friendly, “These guys remind me of everyone from my aftercare days. Everyone is younger than 25, and we all get along.” In the background, Greg’s coworker Nina jokingly calls him a bad manager. Greg whips his head around and flips her off, just before reaching to hold the door open for an incoming customer.