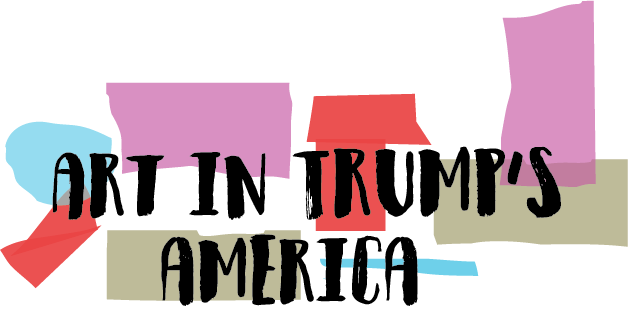 Many in the nation woke up the morning of November 9 in a sort of hangover, dazed with complete disbelief. They were waking up to Trump’s America.

Never before has it been “Insert-President’s-Name-Here’s America” as much as it is now Trump’s America. Since election day, there has been a constant chorus of, “People are scared,” “What just happened?” and “What now?”

For artists like Joseph DeLappe, who is also the former director of the digital media program at the University of Nevada, Reno’s Department of Art, it’s no different.

“I guess I have mixed feelings about what has happened,” he said. “It’s been heartening on the one hand to see so many artists having a wake-up call in a way, sort of like, ‘Oh, crap! We’ve been fiddling while Rome burns,’ type of thing.”

Like many elections in the past, there definitely was no shortage of art. Artists kept busy, pumping out diverse works from portraits of Trump painted with menstrual blood, a naked Trump statue, and countless pieces of street art, to Saturday Night Live satire and comedy.

In what many consider turbulent times, art can change the narrative, according to DeLappe.

“In these kind of circumstances, I think what artists do becomes very important,” he said. “It becomes a way of not just reacting, but perhaps helping form other ways of dealing with our contemporary situation.…[It’s] giving opportunities for dialogue, giving you information that allows you to make up your own mind, and opening those gates in a way that are not always addressed typically.”

Despite the flood of creativity sparked by the election, DeLappe believes the art world could have done more—a lot more.

“The art world has always been a kind of separate entity,” he said. “It would be interesting to see whether this translates into concrete action or results on the part of artists.”

It’s no doubt that artists are aware, but to DeLappe, the question lies in the decision to ignore reality.

“I think artists tend to be some of the most … engaged in terms of what’s going on in a kind of zeitgeist sensibility,” he said. “There is a responsibility on the part of artists to not disengage from this world. I think we can’t afford to. The stakes are too high.”

Definitely, in the last 15 years, DeLappe himself immersed his work in politics more than anything else, working on projects like “Liberty Weeps,” a collaboration with 3D artist Charlie Becker for a Los Angeles exhibition called Manifest Justice. The cardboard sculpture reflects Lady Liberty with her face buried in her hands, weeping. It expresses a “sense that things have gone wrong in this country,” according to DeLappe. Originally intended to portray feelings toward police shootings of young black males and its issues of justice, its meaning has morphed since its inception in 2015. Now, it means the current state of immigration to Antonio Varga, who came to the United States as an undocumented immigrant from the Philippines. To many more, it personifies this election.

Undoubtedly, the President’s campaign over the last election cycle raised fears that under his presidency, First Amendment rights could be restricted and even threatened.

“When you have someone like Trump coming in who’s uniquely unqualified and really doesn’t seem to be even aware of that basic tenants of our legal system, justice system, constitution, it’s scary,” DeLappe said. “I think we need to be ever vigilant.”

With Trump’s claims to “open up libel laws,” threats to revoking citizenship of flag burners, and Tweets about shutting down “boring and unfunny” shows like Saturday Night Live for their criticism, Trump has talked the talk. But, can he really walk the walk?

Patrick File, a professor in the University of Nevada’s journalism program with a specialty in media law and policy, highly doubts it.

“Broadly speaking, some of the claims that the president has made, his direct ability as president to do that is relatively limited,” he said. “It’s a stretch to assume that the election of Donald Trump automatically starts to erode the specific legal principles or protections under the First Amendment because those rely on court rulings.” 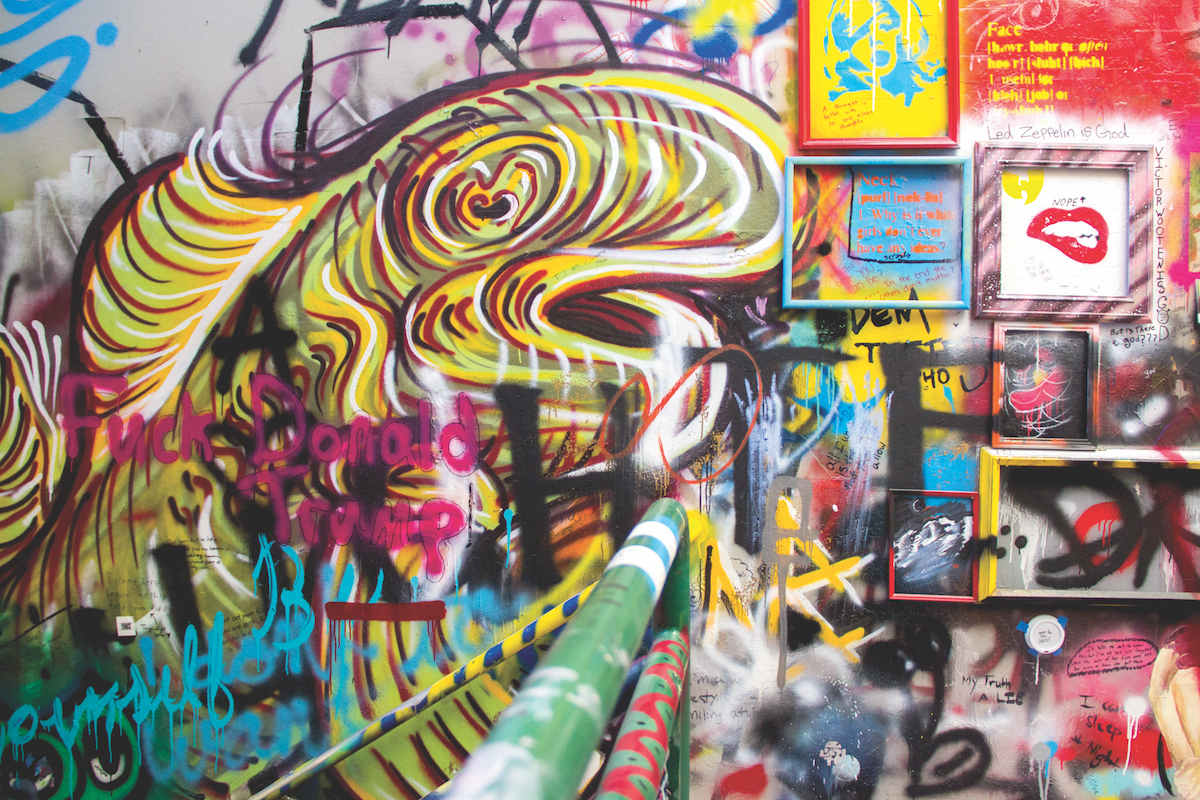 According to File, Trump would have to appoint a series of justices that completely align with his ideology, which is never guaranteed, to overturn a Supreme Court precedent like those set in New York Times v. Sullivan. This case reinforced cornerstone First Amendment values.

Even if Trump does manage to secure these like-minded justices, File said, the most that can happen is a weakening of those legal standards over a long period of time.

“If you’re a public official in this country, thanks to the First Amendment, you have to put up with a great deal of criticism,” File said.

File said that the standard set for the First Amendment is what Supreme Court called “a commitment to wide open, robust … conversation about political issues.”

“The president doesn’t get to just change [Supreme Court rulings],” File said. “The point of checks and balances is having these separate but co-equal branches of government so that the president, for that very purpose, can’t just say, 'Well, we’re gonna have a new law…as far as what can be protected by the First Amendment or what cannot be protected by the First Amendment.”

So, despite the talk, artists should be okay—legally.

“The landscape of American law is INSIGHT 24 one that makes it more difficult than other places around the world … to just crack down on art that the government doesn’t agree with or that people find offensive, troubling, or opposite to the dominant views,” File said.

He also believes that in many cases, it’s less about the law.

“[The presidential administration] can set a landscape and a tone, as the campaign did, that is either accepting of ideas … that are themselves not necessarily censorship and aren’t necessarily the government censoring the people’s speech, but that make it so people don’t feel comfortable speaking up,” he said. “So if you’re an artist who’s a person of color, a Native American, a Muslim, or even for that matter a woman, you may feel less comfortable talking and speaking up … not because there’s any explicit legal ban on you doing so but because you feel like there’s a stronger social backlash.”

To Cullen Wegman, a second year graduate student at the UNR’s Fine Arts program and a self-proclaimed political artist, art is the weapon to fight back.

“I think that art is a tool that will help those [minority] communities to find one another and find solidarity and strengthen the resistance,” Wegman said. “Trump is never going to listen to anybody who thinks differently from Trump. But, if you find enough other people who will listen to you because they’re genuinely interested in what you have to say, that’s where their art becomes a very powerful tool.”

“I think now is the time to make art, honestly. Some of the most repressive times have produced some really interesting and completely different art.”

Here, she references the birth of a particularly unique and novel art form in the late 80s and early 90s: hip-hop. This new genre was bigger than just catharsis. It was also “a direct reaction to the Reagan administration … [and] how the urban areas and cities were left behind.”

“I think that’s a fundamental and important part of art making, to address your particular circumstances but also speak to the powers that beat,” Dr. Lindberg said.

In a time where most people see history repeating a very grim part of itself, she believes this is absolutely the time to continue making art, not stop it.

“There’s different reasons to do it,” Dr. Lindberg said. “Part of it is to express yourself, to have your voice be heard. Some other reasons are because art, depending on the context, heals and speaks to communities in larger ways, not just simply looking at the facts of whatever repressive political climate that you’re in.”

Art is here to stay, then, and artists are definitely finding a lot to say as President Trump’s administration pushes onward. Who knows what can come out of it in the next four years? Weird times call for weirder measures.

“I think there is a prevailing view that art should be there to please and to entertain,” Dr. Lindberg said. “I think there needs to be more discomfort and analyzing why you feel uncomfortable. Ultimately, art is about expression of individuals, of groups, of societies. Listening is always better than not.”