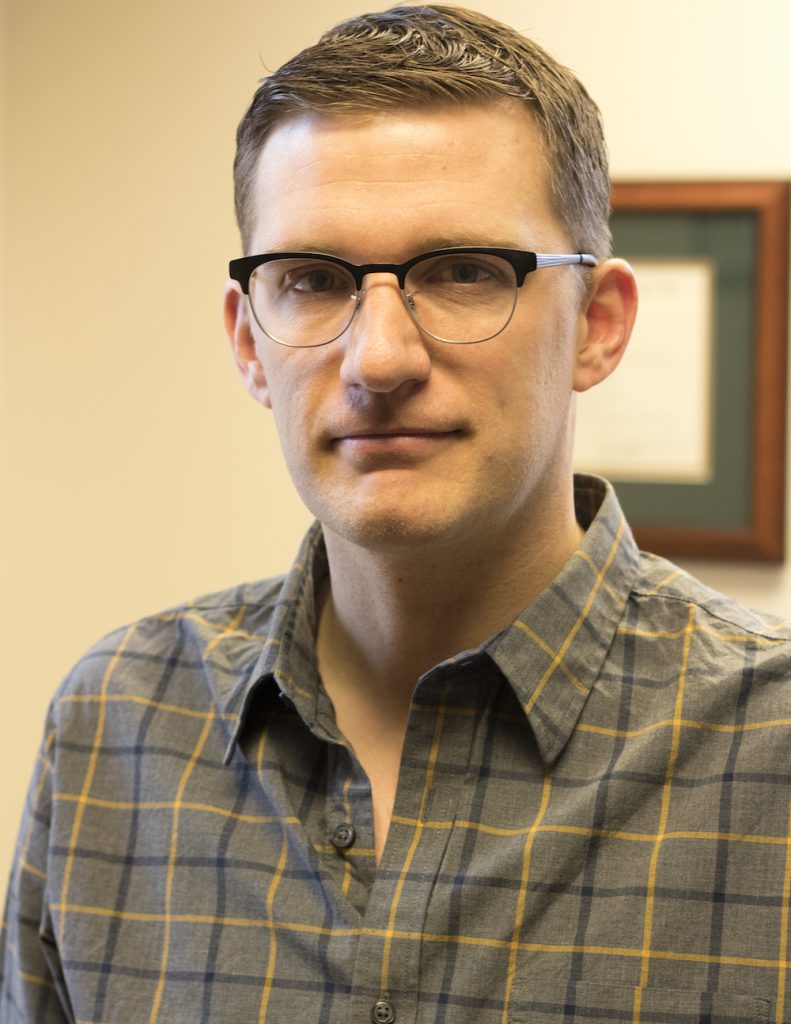 Professor Ben Birkinbine may be considered relatively new to teaching at the Reynolds School of Journalism. He has been a professor at the University of Nevada, Reno since 2014, yet he’s considered to be a fan favorite among students for his knowledge of freedom, journalism, and pop culture references. Birkinbine teaches several courses at the Journalism School including ‘Foundations of All Things Media’, ‘First Amendment and Society’, and a graduate course called, ‘The Future of Journalism’.

According to Birkinbine, the desire to become a professor can be traced back to a couple things—one of which includes coming from a family of educators that taught at public schools back in Wisconsin and having the teaching trait in his blood. Birkinbine also noted that during his freshman year of college at the University of Wisconsin-Green Bay , he took a course by the name of ‘Freedom and Social Control’ that he considered ‘life changing’.

“That [course] really inspired me to continue investigating more complex issues. Issues in history, politics, culture and all of the rest of that stuff. I was just amazed by the stuff that I was reading, and it was just a big awakening experience,” said Birkinbine.

He recalls the first day of class when his professor wrote, “What is freedom?” and, “What is social control?” on an old fashioned chalkboard as he and his fellow students wrote their ideas down on paper—a familiar assignment he’s implemented in his ‘First Amendment and Society’ course here at the University. Birkinbine remembers the course as being one of those special classes; an awakening experience that would later inspire him to go on and pursue graduate studies.

However, in the run up to the financial crisis, Birkinbine took a job as the director of sales and marketing for an international translation company right after his undergraduate studies. Instability in the company due to rapid expansion also persuaded Birkinbine to further pursue his academic career by getting his master of arts in Media Theory & Research from Southern Illinois University Carbondale, as well as a doctorate degree from the School of Journalism and Communication at the University of Oregon, where his teaching career began.

During his time pursuing a PhD at the University of Oregon, Birkinbine was assigned to be a teaching assistant for the First Amendment course under a professor infamously known for being an authoritative source on First Amendment law in the United States, according to Birkinbine. Over the course of a year and a half as a teaching assistant, Birkinbine became intrigued by the ideas of the course and tried to formulate the knowledge he was acquiring into his own teaching style. Later on, the professor from the University of Oregon became rather ill, and Birkinbine was asked to step in and fully teach the course. It was during this time that his experience teaching the law course landed him a job here at UNR on a visiting appointment. He then went on to become a tenured professor in media studies.

What’s rather unique about Birkinbine’s First Amendment and Society course is the complete dive into the case law. He teaches students to not take freedom for granted, expanding young minds to larger ideas about freedom and social control.

To Birkinbine, total freedom would be the absence of control and influence from any level. He notes that for some, you can never really become detached from all of those things that influence you. But at some point in college—hopefully—you should encounter an existential crisis. According to Birkinbine, it’s here where you can begin to question what it all means, and why you’re here. To him, when you reach this point it can become very empowering because you feel comfortable with the direction you’ve chosen for your life. You become imbued with your own sense of self-worth.

According to Birkinbine, once you get yourself in that headspace, you start to make particular decisions about your own life, and only by pushing yourself outside of those constraints can you really appreciate it. This is where his course on the First Amendment tends to dive into a deeper meaning about larger, more complex ideas. He often ponders the question: What would you do if you could do anything? As well as the concept of freedom and how you would live your life to give it value.

To Birkinbine, these are the broad subjects you have to wrestle with when thinking about freedom, control and where the two meet. He doesn’t want his students to take these ideas for granted. He wants them to understand the richness of thought that goes into law. To Birkinbine, it’s important to ponder the ways in which you’re free now, and how that translates to concepts like freedom of speech and freedom of the press.

Another component to Birkinbine’s academic background is the research and writing he takes part in. The main area of research he’s involved in is called, ‘political economy of communications,’ which is primarily concerned with investigating the structures that enable the production, distribution, exhibition, or consumption of media resources. Birkinbine, along with two other editors and 27 other contributors, published “Global Media Giants” last year. According to Birkinbine, there were other texts similar, yet outdated, and the time was right for another volume that would investigate specific companies, analyzing the ways they have political, cultural, economic, and other power.

In addition to his recently published book, Birkinbine says he’ll be traveling to London this summer for research similar to his dissertation, focused on free and open sourced software that will he hopes will lead to a solo authored book.

As an authority on the First Amendment, Birkinbine doesn’t actually believe that it’s in danger despite concern being rather prevalent. He describes it as being one of the hallmarks of American democracy with a longstanding tradition of being there. Yet to Birkinbine, the more that organizations sprout up and pedal fake news, or distort some of the facts—it undermines the credibility of the media as an institution and does become a threat.

Birkinbine, along with other colleagues at the Reynolds School of Journalism and local activists, have recently been asked to give talks about the first amendment to the Reno community by request from the Nevada Humanities Council and Action Together Nevada. According to Birkinbine, people come who are concerned about threats to freedom of speech and to freedom of press on behalf of the current administration.

“We fielded the questions and talked about our own experiences with free speech, the press, etc., and just answered questions from the community, and I think that was really impacting,” said Birkinbine.

In addition to the studious work and research Birkinbine does as a professor, he is also the bass player for Fine Motor—a local, independent rock band composed of himself and several members from the English Department at the university. According to Birkinbine, Fine Motor has been described as sounding similar to The Velvet Underground with a dreamy, poppy, surfy, shoegazey sound.

Birkinbine and his band do mostly originals with a few covers thrown into their shows at the Holland Project and Sundance Books. They even have an album coming out through Exotic Fever Records around July. To Birkinbine, it’s great to have a creative outlet simply because he grew up around music, taught himself to play and went to punk rock shows in the midwest in his youth.

According to Birkinbine, when it comes to the band or shows, he shamelessly promotes them in his lectures and highly encourages people to check out Fine Motor.

“I think it was at the end of last semester. There were actually quite a few students who showed up. They made signs. It was quite embarrassing,” Birkinbine said, laughing. “For them, not for me.”

Yet, if Birkinbine and his band were to make it big in the music business, he said he wouldn’t quit his day job. After briefly being in a band with De’Mar Hamilton, drummer for the Plain White T’s, and being friends with their tour manager—Birkinbine says that he knows just too much about the music industry and how temporary it can be. Plus, he really enjoys being a journalism professor.

What Birkinbine likes about teaching is getting students excited about communications, journalism, media, and trying get them to see why it’s important; why they shouldn’t feel like it’s an undervalued subject area.

When it comes to his love of teaching Birkinbine said, “It may be a cliche answer, but I do think it’s that seeing the progress of students and seeing students get interested in a topic.”