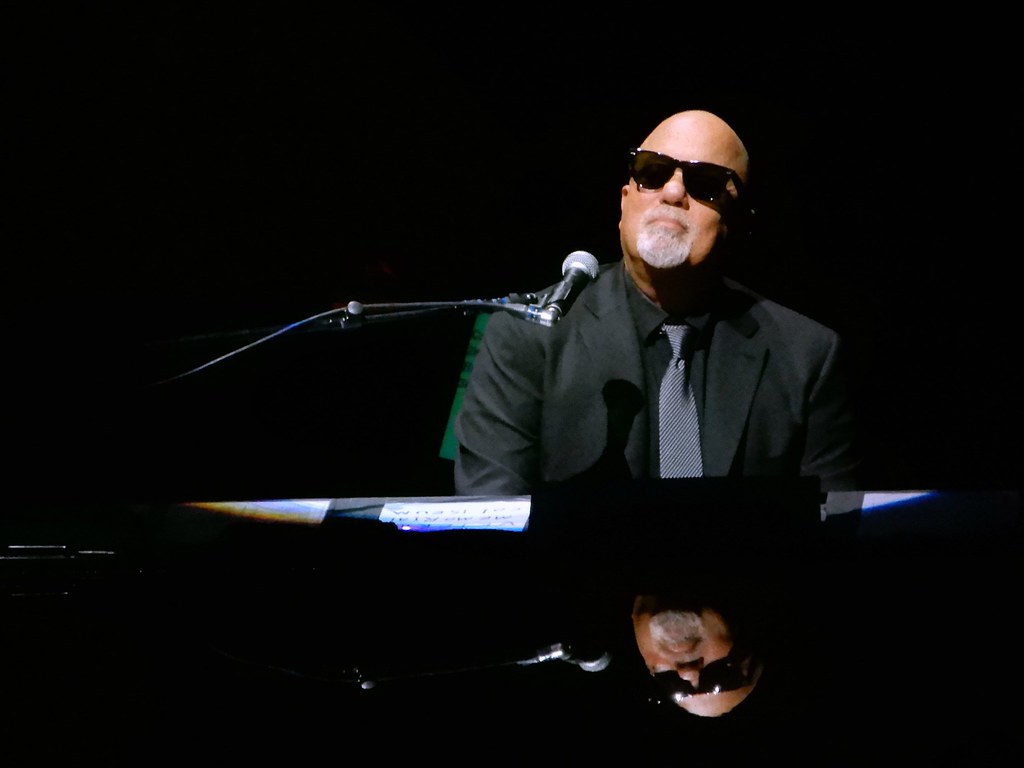 Whether it’s on a date or just talking to an acquaintance, the question “What music do you listen to?” will always arise.

When I share my musical tastes, it’s usually greeted with respect and mutual interest. I tell them how much I relish music from the 60s through the 90s. The Beatles, Michael Jackson and Tom Petty are usually mentioned first, along with a few contemporary artists like Adele or Post Malone for good measure.

But there’s one artist that’s almost always met with either a sour frown of disapproval or a derisive exclamation of “Why?”

That artist is Billy Joel, The Piano Man. I bet some of you reading this made that exact same face of disgust or confusion.

Yes, that guy. And no, he doesn’t do that song.

I’ll be honest: I love Billy Joel. He’s my all-time favorite singer-songwriter. Period. His songwriting and stage personality is unmatched by very few — in my book.

Being a musician myself, I constantly cover his songs at gigs and insist on playing at least one tune of his when I work with other musicians. I’ve seen him live six times in five separate cities. I love the guy, and I love his music.

And I’m far from the only one. Joel has sold over 150 million albums and has had multiple Top 40 hits in the 70s, 80s and 90s. He’s won Grammy Awards, has 20 Platinum Record awards and his music has been streamed more than 1 billion times. He is the 6th best-selling recording artist of all time. As he nears his 71st birthday, he continues to sell out stadiums, with his Madison Square Garden residency concerts being one of the top 10 highest grossing concert series of the past four years. He has a fanbase that spans multiple generations. He’s no slouch.

A lot of people love Billy Joel. The proof is in the pudding. So, why do so many critics and listeners continue to hurl insults at him? Maybe some are jealous that he married supermodel Christie Brinkley? Maybe a lot don’t know much of his material outside of “Piano Man” or “Uptown Girl”? Perhaps some people just prefer Joel’s contemporaries, like blue-collar rocker Bruce Springsteen or the glitzy and glamorous Elton John?

Although he has stopped writing pop songs, Joel is, and forever will be, a songwriter. He has no definitive style yet many at the same time. He is a musical chameleon who has written hundreds of songs across the genre spectrum, many of them commercial hits.

With all of that said, I asked myself a serious question: If I had to pick 10 songs that could convince a Joel-hater to think differently or turn a new listener into a fan, what would those songs be?

So, I’ve chosen five of Billy’s biggest and most well-known hits, along with five lesser-known gems that hopefully give an idea of his flexibility as a songwriter and a pop star.

I’m not saying these are the best Billy Joel songs, or even all of my favorites. If “Uptown Girl” comes on the radio or up on my queue, you better believe I’m singing along at full volume. These are just 10 songs that I believe best represent Joel as a versatile songwriter and as a legendary hit-maker.

“Only the Good Die Young” was written while Joel was on tour as the opening act for the Beach Boys in the mid 70s. Originally written as a reggae song, Joel, his then drummer Liberty DeVitto and producer Phil Ramone reworked the song into a rock shuffle complete with a walking bass line, bright guitar jabs, jangly piano and a squealing saxophone.

The song was an initial dud. Its pro-lust story of convincing a strict Catholic girl to shed her religious ways and have a little fun — and a little sex — with the song’s protagonist stirred controversy amongst Catholic colleges and communities, resulting in numerous radio station bans. But once something isn’t allowed, people want it. In an act of rebellion, droves of young adults ran out and bought the single. The song skyrocketed up the charts soon afterwards. Joel would later write letters to the Catholic archbishops saying, “Thank you, please ban my next record.” It’s an irresistibly catchy song that nails the energy and impatience of youth. It has remained one of Joel’s most popular songs and it’s one of his best — and my personal favorite.

Before Joel released “The Stranger” in 1977, which garnered him four Top 25 hit singles and propelled him to superstardom, he was a relatively unknown artist. He had a modest radio hit with “Piano Man” in the early 70s, but he still struggled to find the real commercial success of a true pop star. However, he persevered and released a string of small-time albums that slowly built up a following.

“Turnstiles” happens to be one of those under-the-radar albums, and the crown jewel has to be “Summer, Highland Falls.” The song is an incredibly mature and reflective ballad that focuses on a couple’s struggles after the honeymoon phase of their relationship has ended. Although the two lovers may care for one another, they begin to realize that they are two different individuals with different desires and aspirations. The musical composition also reflects the characteristics of manic depression. The melody moves up and down constantly — just like the moods of anyone suffering from the affliction. It’s a beautiful, underrated soft rock song that shows Joel’s knack for emotive and relatable songwriting.

“You May Be Right” is one of Joel’s hardest rocking tunes. Written for his first wife, Joel convinces her that although he may be pugnacious, edgy and crazy, that’s the whole reason why she loves him in the first place. The song opens with the sound of a window shattering (a tongue-in-cheek nod to the title of the album) and dives straight into the crunchy, Beatle-esque riff. Joel spits out the lyrics in a fashion similar to Mick Jagger, and the driving drums and sax solo seal the deal. The song peaked at number 7 on the Billboard Top 100, and has remained a live encore favorite and typically closes every show.

Perhaps one of Joel’s most beloved album tracks, “Vienna” is a delicate composition with a strong message. When Joel was a child in the 50s, his father left him and his mother to live in no-longer-Nazi-occupied Europe. Fast forward two decades, we find Joel meeting his father again in Vienna. Billy was captivated by the city and its culture and decided to write a song dedicated to its beauty and promise.

However, even though the ballad has a Middle European flair, complimented by an accordion and strings section to go with Joel’s vocals and piano, the song isn’t specifically about the Austrian city. It’s more about pursuing your passions, but also recognizing the value of taking your time and making sure you don’t burn out too early. Joel uses Vienna as a metaphor for the rest of your life, reminding listeners that their dreams don’t have to come true next week.

In the 1980s, traditional rock and pop were being challenged by new wave and punk sounds. Music was becoming more of a fashion statement than an artistic one, and materialism gripped America during an explosion of credit card popularity. These new movements in the music culture of America were seen as completely revolutionary and game-changing by critics. But Billy knew better.

“It’s Still Rock and Roll To Me” was written as a social commentary on how punk and new wave was just rehashed 60s garage music, and how the music industry and the public were focusing too much on an artist’s looks, clothing choice and material possessions instead of their melodies or message. The stompy guitar and bass driven song is full of acidic lyrics that point out the hypocrisy of the music business and fans too blind to understand the reality of their “new” music. It was Joel’s first Number 1 hit, and remains an encore during his live concerts.

Originally written as a poem, “And So It Goes” is one of Joel’s most touching and underrated compositions. The song discusses the sorrow and insecurity that comes from being in a doomed relationship, along with a lover’s eventual romantic departure. It’s a sparse arrangement, featuring only Joel’s vocals and his piano along with a subtle string accompaniment. The song’s atmosphere is hymnal and stately, leaving the listener with a hauntingly lonely and all too familiar feeling of lost love.

Billy had a rough time in the early 1980s. He was going through a divorce. He was in a motorcycle accident which temporarily damaged his piano playing hands. One of his biggest musical idols, John Lennon, had recently been assassinated. On top of all of that, he was juggling songwriting, recording, touring and all of the other struggles of fame. All of this culminated into the synth-driven rocker “Pressure.”

The arrangement is an organized clutter and chaotic fit of anger, speed and frustration that symbolizes the concept of pressure itself. The lyrics throw caustic barbs at all the naive and pampered individuals who don’t understand the true meaning of life’s struggles and anxieties. The music video for the song also received praise for its innovative editing techniques.

Before Frank Sinatra crooned “New York, New York” and before Jay-Z rapped “Empire State of Mind,” Joel wrote the quintessential Big Apple homage that perfectly captures the magic of the concrete jungle’s vibe and culture. Being a proud native New Yorker, it was easy for Joel to pen a song so heartfelt and accurate. The jazz rock song which features a soulful Joel emulating Ray Charles has become synonymous with New York City, as well as the Piano Man himself. Although not a commercial hit, it’s one of his most recognizable tunes and proudly displays his Long Island roots.

The album “An Innocent Man” was Billy’s homage to doo-wop and early rock and roll groups of the late 50s and early 60s that he grew up listening to as an adolescent. The album had massive hits like “Uptown Girl” and “The Longest Time,” but the title track is an impressive feat of songwriting for Joel.

Sung and recorded in a style similar to groups such as the Drifters and the Righteous Brothers, “An Innocent Man” paints a musical picture of a man trying to convince an insecure and heartbroken woman to put aside her pain from the past, while assuring her of his patience and his innocence. With a strong sense of dynamics, the chorus soars with strings and high notes from Joel, and the verses cool down with whisper-like crooning and finger snaps.

It’s only fitting that this song closes the list. After 12 albums, Joel felt like he’d had his say. “The River of Dreams” was his last pop album, and he hasn’t recorded a new song since. Despite it being his last, it was a massive commercial smash.

The title track, which the album is named for, is an upbeat combination of rock and gospel styles. The song’s lyrics are loosely based around biblical allegories and locations, whereas the melody came to Joel in a dream and refused to leave his head even after he tried to shake it. The song hit Number 3 on the Billboard Top 100 and Number 1 on the Adult Contemporary charts and remains a staple in Billy’s live concerts.

Well, there you have it. 10 songs. That wasn’t so bad, was it? Well, maybe if you can’t stand Billy Joel it was. But maybe you’ll pull up a few of these on Spotify or YouTube and have a change of heart, or a change of ears.

Much love to the Piano Man, and happy listening.