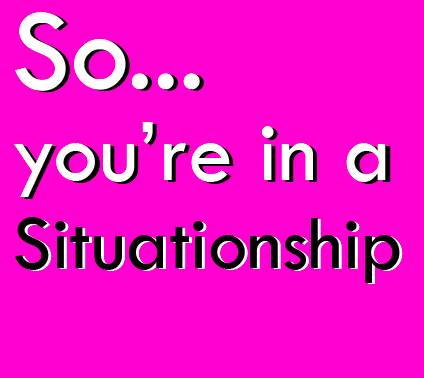 So, You’ve Found Yourself in a “Situationship”

The Situation in “Situationships”

Everyone has had that awkward timing between being single and being in a relationship. A “situationship” you might call it. While these bits of time may be beneficial to your possible upcoming relationship, you must be able to pick out when these situations have gone sour.

To fully understand what it is like in this position, you have to hear all the viewpoints.

Karlie Trumbull, a Bay Area native, gave the lowdown on her experiences and how she picked out the “situationships” that went south.

Trumbull had been in two major “situationships,” but has since stayed single due to the lack of energy that was being returned in both. “One left me emotionally, mentally, and physically destroyed,” Trumbull said, “I was untrusting of everyone after him.” While Trumbull commented that she was happy being free, she still “misses innocent interactions that mean so much more than the sexual ones.”

Joshua Rush, a junior at Los Medanos College, has moved on from “situationships” and finally settled down in a real relationship. Rush and his girlfriend made their title official seven months ago. They started off as coworkers who became friends who became more.

Being in a relationship isn’t always like the movies. The petty arguments that spring from someone being in a bad mood is a downside to look forward to, according to Rush. But in the end, this couple knows they will work it out as long as they talk it out before falling asleep.

Michael Shaw and Melissa Vidal are two freshmen at the University of Nevada, Reno that are currently in a situationship with each other. Shaw describes their situation essentially as a relationship without the title.

Vidal explains that at the moment the two are just stuck because they feel it isn’t the right timing for either to be in a relationship. While they know their picture isn’t perfect, they both believe this “situationship” is benign to them.

“By having a situationship you’re able to have that one person you really love to be around while not having to exert the normal energy that you would in a normal relationship,” Shaw said.

“It’s beneficial for us because we are both on the same page but it’s rare when you can both agree with everything,” Vidal said. While the two have only been in this “situationship” for about a month, both have strong views on the pros and cons about it.

The pair agree that it’s desirable to have the flexibility of being single while also still have the emotional and physical support you would expect in a relationship.

While this may make the pair seem carefree, there is still strain because of the imbalance in emotion and physicality.

“You don’t get to have that normal relationship with all of the cliche traits like the formal dates, family functions, or simply just small gestures,” Shaw said. Vidal said that is what causes her the most distress is the fact that they’re still able to be with anyone they want due to the free nature of their situation.

As they move forward with what they have, the two predict how this may affect their romantic lives. “Moving forward I could only see the romantic elements improve because there really isn’t too much stress or questionable variables,” Shaw said.

Vidal commented more specifically on their “situationship.” “Basically, we aren’t going to be able to stay like this forever. Sooner or later we’ll have to either move forward or move on,” she said.

While Shaw and Vidal work hard to make their situation as unproblematic as possible, this is not always the case. So what should you do if you find yourself in a “situationship” gone south?

“Confront them on why you aren’t official and if they give even the slightest excuse: run!” Trumbull said. “If you have the option, take it slow get to know them then see if there’s a relationship there and if there isn’t you still have a friend,” Rush said.

Shaw suggests not to stay in something that doesn’t make you happy because in the long run, it’s not worth it. “It’s not worth the stress, it’s barely worth the stress now. Drop the bum,” Vidal declared. Romance is confusing, whether you’re in a relationship, single, or still figuring it out. The best advice is to do what feels best for you, mentally and physically.