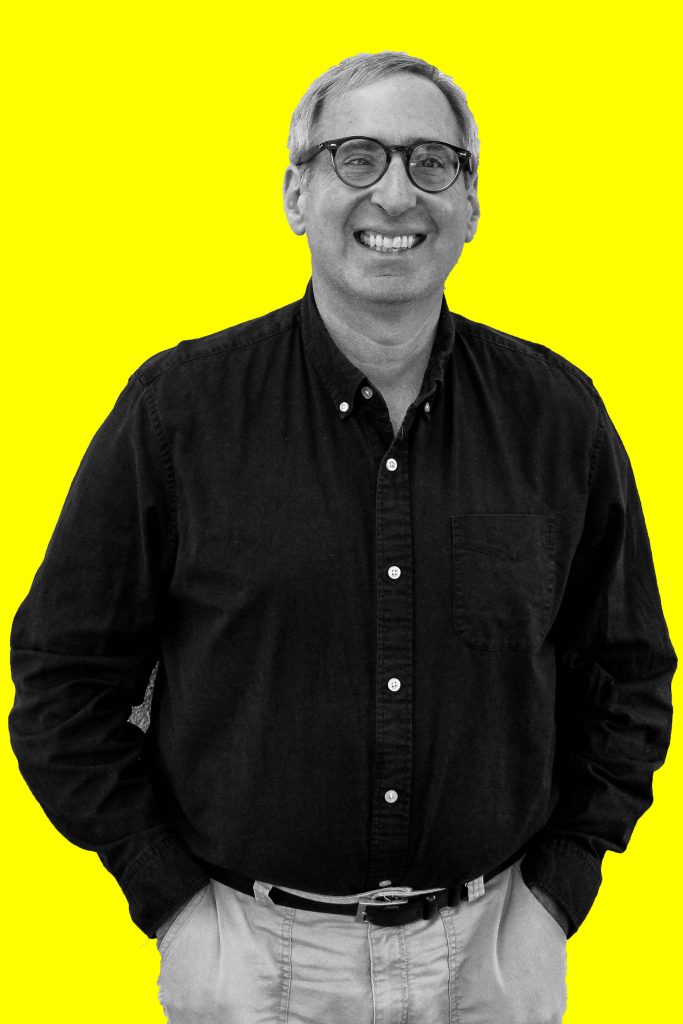 In the suburban town of Woodbridge, New Jersey, 13-year-old Alan Deutchman sat in the back of his father’s car as they drove down to the News Tribune office to meet the paper’s Editor-in-Chief. Alan’s father, Hal, had recently called the paper asking if there were any employment opportunities for his son, but the paper responded by saying there were no paper delivery boy positions available at the moment.

After Hal explained that his young son didn’t want to deliver the paper but rather write in it, the News Tribune found the whole situation to be so humorous that they brought Alan in to discuss potential writing opportunities. But Alan had his first pitch ready to go: A profile on his 7th grade science teacher who wrote a song on how to teach the metric system, and thus Alan had his first writing gig even before entering high school.

Alan recalls being interested in reading and writing from a very young age. Growing up in the suburbs of New York City, he remembers his parents having a subscription of The New York Times and always reading it at breakfast. His love for reporting and storytelling translated into his production of a classroom newspaper in second grade, a published poem in Highlights Magazine, and, of course, his big break at the end of middle school with the News Tribune.

Throughout high school Alan continued to publish work with the News Tribune, writing cover stories for the weekend section as he continued to grow as a writer. After graduation he attended Princeton University.

During his college years Alan wrote for a slew of campus publications including Princeton Alumni Weekly, Daily Princetonian, and Business Today. Alan also spent a lot of his time writing song lyrics and comedy sketches for student theater productions.

By the time Deutchman was ready to graduate from college, he already had an impressive resume of summer internships including The Wall Street Journal, US News and World Report, American Society of Magazine Editors, was actively writing for Newsweek, and had written and published a book when he was 18 on how to get college scholarships, giving him a real taste in professional writing. Yet, Deutchman recalls still struggling to landing his first job.

“I applied to big city newspapers because I wanted to report and write my own stories, and they all said call back when you’ve had four to seven years of professional experience and I didn’t want to go back to a small town newspaper — I had been doing that since I was 14,” said Deutchman.

So Deutchman took a risk and used the money his parents had saved up for him to go to grad school and moved to an apartment in New York instead in hopes of meeting the right people and getting the right opportunities.

Just when Deutchman began to feel like he was making the wrong move and spending his grad school money on nothing, he landed a job as a fact checker and researcher for Fortune Magazine.

In addition to working as a fact checker, Deutchman would spend his nights and weekends crafting story pitches and sharing them in meetings only to have his story ideas assigned to other writers. But soon enough an idea of reporting on venture capital gave Deutchman the chance to fly across the country and write his first big story for Fortune.

After a couple years of fact checking, Deutchman got promoted to staff writer and wrote his first cover story for the magazine on 25-year-olds and their attitudes towards business. Deutchman recalls the issue doing incredibly well in part because one of the guys he interviewed looked like a young Tom Cruise and having him on the cover was a nice contrast from the usual old guys on the cover of Fortune.

With Fortune, Deutchman moved out to San Francisco to become the magazine’s west coast correspondent at the perfect time – when the Internet started to come into fruition which allowed him to do reporting in Seattle, Los Angeles, Silicon Valley, and beyond as the Internet and tech became something everyone was interested in reading.

After four years of working in New York and three years working in San Francisco, Deutchman wanted a change. “When I turned 30 I thought ‘I just spent my 20s writing for business magazines’ and it was great experience, but there were so many other things I was interested in writing about like arts and culture, politics, and I wanted to go in a creative, literary direction with my writing,” he said.

During his year as a freelance writer in San Francisco, Deutchman received some of the wackiest story assignments which involved visiting a prison and almost getting arrested.

He received an assignment from Details Magazine to write about street prostitution in San Francisco near Union Square where street walkers were everywhere. The city created a program where they’d send police women undercover as prostitutes, and when men would solicit their services the police women would arrest them.

For punishment, the men could either go to jail or attend a class that would educate them on the societal effects of prostitution and why it’s harmful. With the green light from the head of the vice squad, Deutchman just needed permission from the district attorney in order to sit in on the educational class.

“I called and left messages, and she wouldn’t return my calls,” said Deutchman, “I would put on a suit and go down and hang out in the office, but there was no way to get through and my deadline was coming. I was a freelance writer, I needed my articles to get published to make money so I could pay my rent.”

In the meantime Deutchman interviewed the public defender who hated the program. He remembers her saying that if he went out with her on a Saturday she’d point out one of the undercover police women, and then he could go up to her and solicit her services. The undercover cop would then arrest him, so he could be in the class.

“I called my editor in New York and asked ‘is it okay if I commit a misdemeanor, a crime to get the story’ and they were like ‘yeah go for it,’ but then the district attorney called me back and let me sit in on the class, so I didn’t have to go get arrested to get the story,” said Deutchman.

That’s not the only time Deutchman came close to getting arrested for a story. Years after the prostitution story, Deutchman received an assignment from GQ to interview Sam Waksal, the man who conspired with Martha Stewart on the insider trading case, in a men’s minimum security prison. After Waksal’s family declined an interview, Deutchman decided to just go down to the prison and find Waksal hanging out.

Sure enough there were no fences, and the prisoners were just walking around. Before Deutchman could find Waksal, the prison guards brought him in for questioning.

“That was pretty funny because I had never been to a minimum security prison before, and it was the summer and I was wearing what I usually wear which is khaki pants, running shoes, a navy blue t-shirt, and a plain baseball hat, which is just kind of how I dress, and I didn’t realize that’s how the prisoners dress,” said Deutchman, “When you go to visit you’re not allowed to dress like that because you’ll look like one of the prisoners which I didn’t know any of that.”

Fortunately the guards let Deutchman off with a warning as he avoided jail time yet again.

Throughout the rest of his time freelancing, Deutchman wrote stories for The New York Times Magazine and Wired as well. But with the unpredictability of payment while freelancing full time, he moved to New York once again to take a job as a senior writer with GQ where he had his own column about business called The Profit Motive.

After a few years working for GQ it was back to San Francisco for Deutchman. This time around he had stable work as a contributing editor for GQ, Vanity Fair, and New York Magazine. He also pursued a literary direction at this point in his life writing books including The Second Coming of Steve Jobs, A Tale of Two Valleys, Change or Die, Walk the Walk, and How Steve Jobs Changed Our World.

Throughout the entirety of his writing career Deutchman always felt like he’d eventually want to teach, too. “My father was a professor for 45 years, so I grew up going to his university, watching him teach, liking being on campus, and I always had the idea that at some point I’d like to be a professor,” he said.

When he got into his 40s Deutchman’s father kept sending him job listings of professorships around the country and asked him what he was waiting for. After sending Deutchman all of these listings, Hal called his son up on the phone and said the journalism professorship at the University of Nevada, Reno, would be perfect for him.

Deutchman remembers taking a closer look at the job because of Reno’s proximity to the San Francisco Bay Area, but after coming out for the job visit he discovered he liked the faculty, had a good feeling, and took the job as the Donald W. Reynolds Professor of Business Journalism in January 2011.

In his seven years of teaching at UNR he’s taught classes in business journalism, magazine writing, multimedia reporting, and created a relatively new course called “Narrative: The Art of Storytelling”.

Deutchman’s favorite course to teach by far is magazine writing. “I love how in that course it creates a community of practice where the students contribute so much to each other and are so supportive and encouraging of each other’s writing, and it develops that dynamic where they respect and trust each other,” he said.

His advice to students now is “Don’t wait around for someone to tell you ‘you are a journalist’ or ‘you’re a writer’. No one is going to appoint you. You need people to give you opportunities or to mentor you, but you have to kind of know that this is who you are, and this is what you do with passion, with great energy, and commitment to your field,” he said.

In addition, he said finding a good mentor to help guide you through your career, having one to two great samples of your work, and developing subject matter expertise is crucial for a successful career as a writer.

With a daughter in first grade, Deutchman says he’ll be in Reno for a while and hopes to finish out his career teaching at the Reynolds School of Journalism.