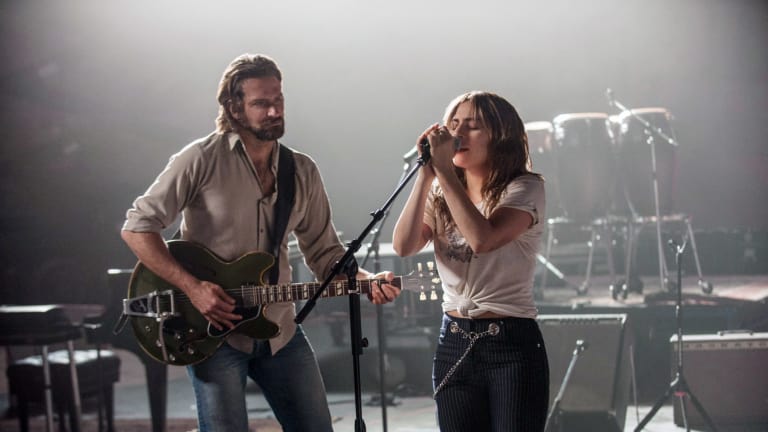 A Star is Born Review

In his directorial debut and her first ever major movie role, Bradley Cooper and Lady Gaga shine in A Star is Born. Offering performances that will undoubtedly receive multiple award nominations, the duo play on each other’s strengths as an actor and musician to deliver the definitive version of the 1937 film of the same name.

Cooper portrays rock star Jackson Maine who discovers Gaga’s character, Ally, while she performs one night at a local drag bar after her shift as a restaurant worker. Her unrecognized talent as a singer doesn’t stop her from performing there every week, but when they lock eyes during her performance, time slows down and it’s clear Jackson sees something in her. What follows is an intimate journey as Jackson helps Ally discover herself as an artist that leads to her own fame and success she’s always dreamed of. The two fall in love in the process, but Jackson’s long battle with addiction and alcoholism cause strain on their relationship the audience gets to see unfold.

Watching the film and seeing Cooper portray a character go through such a real struggle that every generation has seen claim the lives of so many great musicians left me feeling as helpless as his character. As the fourth remake of the original 1937 film, the story isn’t meant to be original, but it shows just how familiar we are as a culture with watching the stars we love battle with their demons in the limelight. Cooper’s version of the film tells a story people can still learn from so the next time they witness or know someone struggling with addiction, they can have a better understanding of what it’s like and try to empathize.

The biggest strengths of the film are undoubtedly its soundtrack and musical performances that were shot live at real festivals and concerts. The film’s opening sequence of Cooper rocking out and performing to a screaming crowd instantly showcased his remarkable transformation from actor to musician, and the soundtrack solidifies Gaga as one of the most versatile artists of this generation, The film’s lead hit single “Shallow” not only sparks the beginning of Ally’s career in the film, but is also one of Gaga’s greatest hits she shares with Cooper. With hard rock songs like “Diggin’ My Grave” and “Black Eyes,” country songs like “Music to My Eyes,” and pop songs like “Hair Body Face” and “Why Did You Do That?,” there is a song for nearly everyone to enjoy.

With a runtime of 2 hours and 15 minutes, the film felt lengthy and slow at times, but the musical performances typically broke up any monotony found later in the story.

A Star is Born succeeds in telling a familiar story of love, passion, family, fame, and struggle that will have you leaving the theater in admiration for both Cooper and Gaga’s honest performances they clearly gave their all. Believe in the hype and catch this must see movie in theaters while you still can!